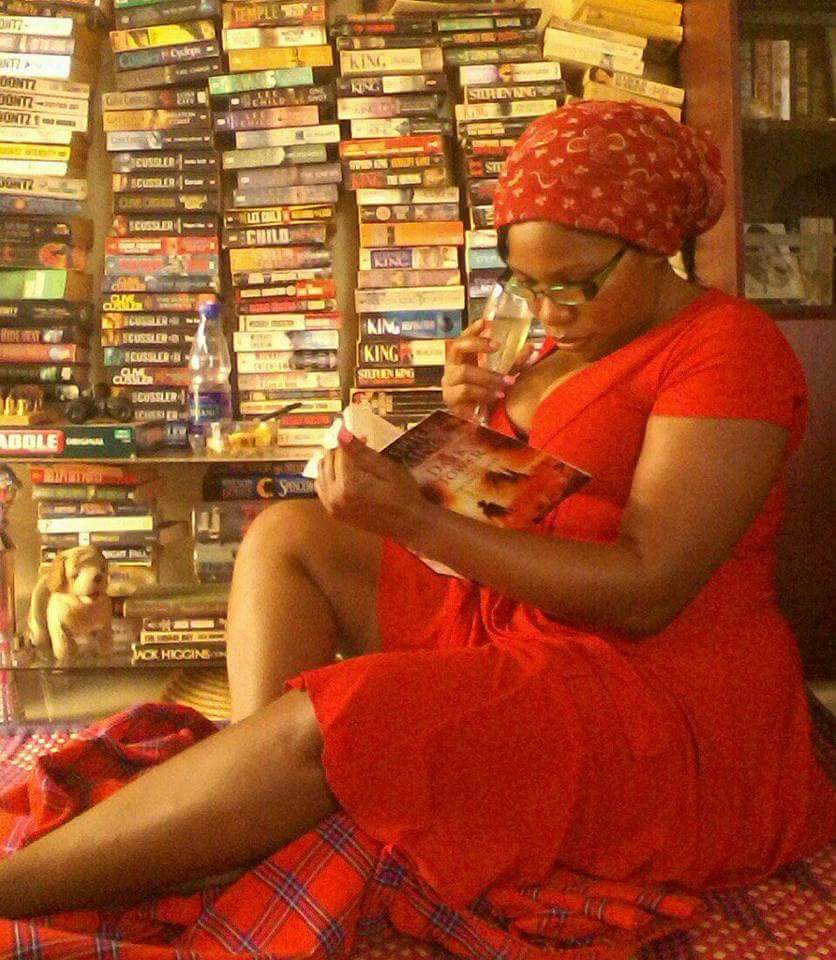 There’s something sentimental, almost mysterious and aphrodisiacal about a woman who chews books.

I mean, with the competing priorities of today’s life such as: filing her nails, manufacturing a new hairstyle, fixing a hot meal for hubby, slapping her little rascals to bed, panel beating that report at work, sipping a hot Cappuccino with the girls while getting an update on Denzel Washington, ensuring that her makeup is on point by staring at the mirror for a decade, flirting with a secret admirer on WhatsApp and catching up with another episode of that Mexican hunky. It’s therefore admirable to see a woman taking time amidst her busy and very demanding lifestyle to chew a book.

You can learn a lot from a woman who is always hungry for knowledge. Reading a book is no walk in the park. It’s almost like hitting your local gym or marrying a slay queen. It demands discipline, dedication and sacrifice. That’s why you rarely see average souls reading or flirting with books. In fact, if you want to scarce away a typical Kenyan, once they are done bitching about politics, Samantha, sports betting and the standards of living, slap them with shitty questions like:

“Hey, so what book are you currently reading.” Warning: you will be slapped with a ridiculously blank look as if you have a coconut tree growing on your forehead. The kind of look that teachers reserve for retarded students.

Me thinks a study needs to be added in our curriculum on a reading woman. A knowledgeable woman is a treasure to have in life. For while her peers are busy slapping the creatures that live in their monstrous weaves in a bid to silence them to sleep, the reading woman is busy accumulating knowledge in readiness to conquer the world.

In fact, while her peers are busy calling for gender equality and affirmative action (and there’s nothing wrong with that), the reading woman on the other hand will be busy arming herself with knowledge in order to have leverage against men’s ego, pride and masculinity. Ever heard of its a man’s world? Well, it is, until a reading woman shows up on the scene. In fact, most men are intimidated by knowledgeable women for it challenges the status quo and keeps them on their feet.

Grandma, that old Isukha gem of a beauty used to say, while on her seventh cup of fermented porridge, that a woman’s beauty attracts a man, albeit momentarily. However, its her intelligence that keeps a man. And on this one, I am with grandma. I mean, how refreshing to have a woman whose talk goes beyond the Kardashians, Auntie Boss, the Real Housewives of New Jersey or shoes from Turkey. How exhilarating it will be to intellectually have a discourse with a woman on the effects of global warming, North Korea’s threat to world peace or even better the erosion of Kenya’s democratic space (obviously, you will expect she refers her citation and exposition to the recent media shutdown).

And if she’s the type who possesses the attributes of “playing for another team behind your back” you will only hope that she will be open-minded enough to discuss, stuff like: Ten things we can learn from Jezebel, Samson’s clande, and while at it, she won’t be offended when you throw in Proverbs Chapter 31. You will also hope that she agrees to chew one of the late Dr. Myles Munroe’s books on marriage and relationships. This, of course, she will agree after being convinced that some basic knowledge in life isn’t found on Nairobi Diaries or Scandals Season 4 but hidden far away in the pages of a book.

For a man – please note that I am using the term “man” loosely to refer to a mature, well-behaved and balanced brother who has his shit together, and not just any brother who carries an appendage between his legs (even a dog has one of those, you know). Anyway, for a real man, a reading woman is a priceless treasure to have and behold. She is the kind, a real man won’t think twice about shipping her to shaggz and flaunt her to villagers and his clan. As a matter of fact, she is the kind, a man wouldn’t need to blink before sending her into the family way, with the justification of preserving her future lineage.

The talk of a reading woman is manicured with a gem of facts, wisdom and insight. You will never catch her spitting words carelessly or emotively chattering empty nonsense. Her mouth has a volume knob, and its doesn’t include loud and louder. She is sober in her reasoning and logical in her deliberations. She will make decisions dictated by clarity of facts, and complimented by intrinsic knowledge rather than by feelings and emotions, sheepishly coupled with ridiculous “ghai” exclamations.

More often than not, a reading woman makes a great cook. Like seriously, how else are you going to learn a new recipe? A reading woman makes a brilliant mother, a great wife, a phenomenal boss, and word has it, a mind boggling lover. And who knows, chances are perhaps the reason men take off once some women open their mouth is because they probably have nothing between their ears other than loads of make-up and a confused slay queen-ish smile. #aReadingWoman

Wow! What an ode to women who love books. “It’s a man’s world” however could be contentious. It was a man’s world when physical strength was the primary recipe for survival. In the contemporary world, where what you have between your ears matters, gender doesn’t determine who owns or runs the world. I get the irony you gave in your statement and it brilliantly serves its message. Well done, Douglas.

Thanks Sonnie for the comment. Glad you got the irony. And I totally agree with your sentiments.

She will make decisions dictated by clarity of facts, and complimented by intrinsic knowledge rather than by feelings and emotions, sheepishly coupled with ridiculous “ghai” exclamations

Wow.
Thanks for this Douglas
it has encouraged me a lot.I love reading.

Hey Grace, you are one among the special ones, I will tell you that. Keep reading, it’s the best investment you can do for yourself and it will certainly take you places. Keep cracking those pages, soon or later they will open doors for you.

A reading woman reads articles that challenges their status quo. Not ’10 things you didn’t know about Jaguar, No. 8 will shock you’ kind of stuff. Keep doing what you’re doing Daggy 😉

Anaklet my brother, I always appreciate your feedback, and yes, I will keep doing this till the gods decide otherwise.

A reading woman is a force to reckon with..I feel challenged Douglas .Its about time I read the books I keep on procrastinating.

Glad the article has challenged you to start reading.

Very inspiring sir…I wish it goes on and on

Her mouth has a volume knob, and its doesn’t include loud and louder. She is sober in her reasoning and logical in her deliberations.

Very Educational. I have found most parts of this article very relevant and I wish many ladies in this Slaying era learnt the Art of improving their brains and academia than to purchase more fancy and kinky bedroom regalia. Big up Douglas. I beg to be allowed to share this.