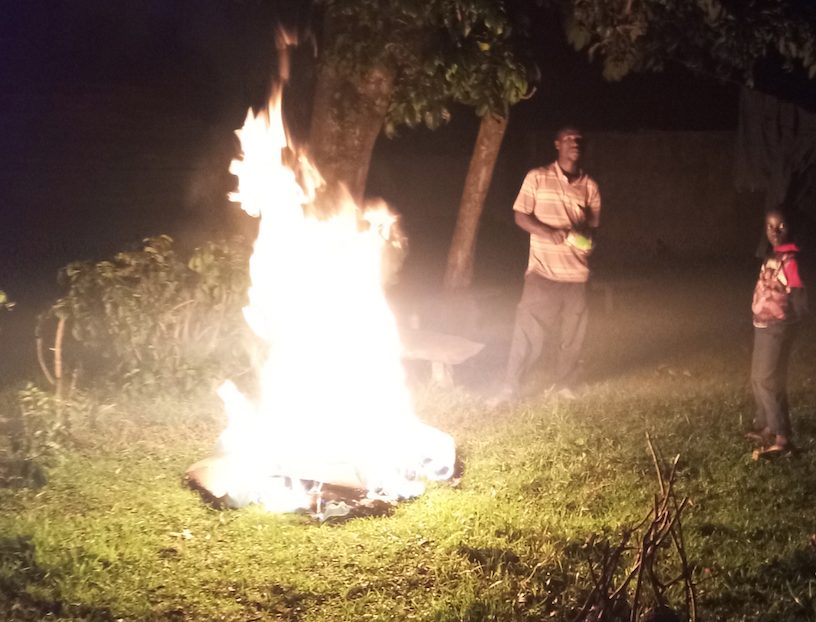 I still remember it like it was yesterday. My mum slapped me so hard, I felt pain in places I didn’t know existed in my body. That slapped landed on my left cheek so hard, for a moment I saw a vision of the Babylonian King Nebuchadnezzar shedding a tear for me. In the vision, I also saw the bones of King Herod turning in the grave in pain for me.

The slap was militarily delivered with dedicated virtuoso reminiscent of a scorned African woman. It was the kind of slap I believe scientists would easily conclude carried enough shock wave to power a village posho mill. That slap in true essence should be classified as part of crimes against humanity. In developed countries, I innocently suspect by now my mum would have been arrested and locked up for life, far from human civilization, lest her sense of punishment is adopted as a blueprint for parenting.

My sin? Well, she caught me attempting to plant a sinful kiss on the succulent lips of Nafula, the neighbour’s daughter, and my then village crush.

Nafula, in case you are salivating for gossip, was the outrageously beautiful daughter of Shikoti, the village herbalist. And in the words of Ainea Shimbalambala, the self-declared village spokesman, she was truly constructed.

I would later describe Nafula’s voluptuousness during a composition class in Standard Six as “possessing a thrilling sinful, sizzling, mouth-watering, immoral holy body that would make my grandfather sneeze with wicked excitement in his grave”.

Well, you must have guessed right, because that piece of historic literary works earned me a thorough corporal punishment that involved uprooting a trunk of tree that oddly dotted the school compound, besides being made to clean the teacher’s toilet for a week.

The punishment was also psychological, besides being physical, because it somehow involved Mr. Kobole, the chubby English teacher who carried a disturbed sense of humour sending a scratching letter to my parents. Maliciously, the letter was by extension also addressed to the whole luhya clan. Intriguingly, that letter had the balls and audacity to question my parent’s parenting skills, not less their relationship with God as well as their comprehension of the African culture.

Without going into details, I was ordered by my parents under the biblical authority of our Sunday school teacher and the hawked eyes of our local pastor that the only book I was allowed to read, besides those described in the Kenya Certificate of Primary Education school curriculum was one of those little blue-cover New Testament Gideon Bibles. And if I was lucky I would flip through my uncle’s Golden Bells hymn book when he came visiting, which was like everyday.

My cherished collections of My Life in Crime by John Kiriamiti, Kill Me Quick by Meja Mwangi, Weep Not, Child by Ngugi wa Thiong’o, I Dreamed of Africa by Kuki Gallmann among others were subsequently set on fire behind our mud-walled kitchen under the prowling eyes of my functioning alcoholic, luhya fundamentalist father. I was heart-broken. Mortified. Crushed. Devastated. I couldn’t imagine my life without reading exciting literature, besides the normal boring school books.

How was I suppose to know and understand the English language outside Mr. Kobole’s twisted class. Not that I had anything personal about him, except that I silently disagreed with him on how most of the English words should be pronounced.

For what is worth, I may have been young then, but there was no way I was convinced that idiot was pronounced as itiot, or joy as choi. And hell no, there was no way under the galaxy of the lovely and bloody Queens Language was the word preposterous used as a noun.

For crying out loud sir, (you have no idea how many times I was tempted to shout in class), preposterous just like grotesque, ludicrous or nonsensical are all adjectives, and should equally and rightfully so be used in a sentence. But knowing Mr. Kobole’s hellish wrath and abysmal tendencies, my then young and restless mouth was wise enough to shut up.

I was under oath (well, more of threats) from my parents that I was not under any circumstances allowed to read anything besides that which the Pastor and powers-that-be at the Ministry of Education subscribed for my young curious mind. As a result, my father would do impromptu searches of my tattered school bag as a way of enforcing his 11th commandment of Thou mayest not read…

Come to think of it, isn’t interesting how parents kill their children’s dreams and talents, instead of nurturing them, all in the name of they know what’s best for them.

Well, after the ashes settled that once was my highly valued earthly possession of literary collections, I cannot tell you how many times I would hid in our banana and maize plantation devouring novels I stole from teachers in school. Sorry, Mrs. Bulinga if you are reading this, I am the one who stole your copy of Devil on the Cross by Ngugi wa Thiong’o.

Ooh! and while we are at it. Pole sana Teacher Solomon. I know you looked for it for almost 3 months, announced countless times about its disappearance during the school assembly and even offered a reward of sugar cane and a white handikerchief. I am the bastard, as you used to curse, who stole your beloved Heart of Darkness by Joseph Conrad. Teacher Mwaniki, in case you are rolling your eyes and gasping for breath. No sir, I am not the one who stole Matigari, for obvious reasons that I couldn’t read Kikuyu.

And now that I am in the confession mood, how on earth could I even think of stealing Matigari from you Teacher Mwaniki? I mean, for someone who always had red eyes and a bad temper, and the way you used to chase your wife around the village with a Japanese sword threatening to kill her and lick her brain like ice cream, simply because she was seen laughing at the pastor’s joke in church. I was wise enough to stay out of your highway to self-destruction.

There was something about the English language that simply captivated my mind. I swear I could slit someone’s throat over a book, of course figuratively speaking. I loved how the Queen’s Language massaged my tongue and slid on my succulent holmberry luhya lips. I admired anyone who spoke good grammatical English with confidence and flair.

Good diction, perfect pronunciation made my knees weak, while my heart thumped with excitement. While my peers were busy swinging on trees and playing hide and seek, I was busy learning, on my own, how to pronounce and spell words like: flabbergasted, concomitance, monstrous, egregious etc. Simply put, I took verbs for breakfast, eat adjectives for lunch, dined on nouns for dinner, and wined on prepositions and adverbs for a lullaby.

Its been now over 25 years since I was subjected to an oath of never to read anything outside masomo ya msingi books. I am currently working on my fourth novel, The Prostitutes of God, having authored: FAR FROM HOME – Confessions of a Foreign Student, The Devil’s Favourite Demons and soon to be published The Making of a Man – Understanding the Nature and Identity of a True Man. In addition to publishing hundreds of articles on this website.

For the record, my dad at the moment is one of my loyal readers. Yes, that chap who oversaw the burning of my earthly treasures, cannot wait week after week to ready my stories.

Why I am saying all this? The point is this: I want to encourage everyone not to kill their dreams and talents, or allow anyone for that matter to kill your dream, either by their words or actions. Its sad to think of how many us have already died, call it, the walking dead, having killed or allowed other people to kill our passion and dreams in life.

We have been made to stop pursuing what we love and are passionate about, just because we encountered some hurdles or disappointments, or we have been coerced to walk away from our dreams. We threw in the towel because it wasn’t paying when we began, or someone convinced us that we weren’t good enough.

Over 25 years later, I have loyal fans in Slovakia, Argentina, India, Senegal, Australia, Singapore, China, United Arabs Emirates, and pretty much the whole globe reading my stories and having a good laugh while at it. My inbox is filled with feedback from people around the world who can’t wait to read my stories. People I will probably never meet or know, but who look forward to being entertained, informed and educated by a boy who grew up in a village basking in the middle of the Rift Valley. A boy who refused to give up on his dream.

I encourage you to do something about your passion. Instead of seeing obstacles, see opportunities. Don’t take to the grave that amazing idea, gift and talent God gave you. Don’t enrich the cemetery with your potential. Don’t die while you are still alive. Do not let what you cannot do tear from your hands what you can, goes an Ashanti proverb.

Great insights as always. I enjoy reading your articles.

Amazing! I’m not dying with my talents. I am dispersing them like seeds, to wherever they’ll find the fertile soil.

Thanks for the read and feedback Kevin.

It gives me satisfaction to you that you enjoy the reading. Thank you for the great feedback Judy.

Absolutely. That’s the whole point. To die empty, as the late Myles Munroe puts it.

Wow! This is an encouragement to me not to give up in what I’m doing .No matter the obstacles that comes my way.Thank you Douglas Waudo.