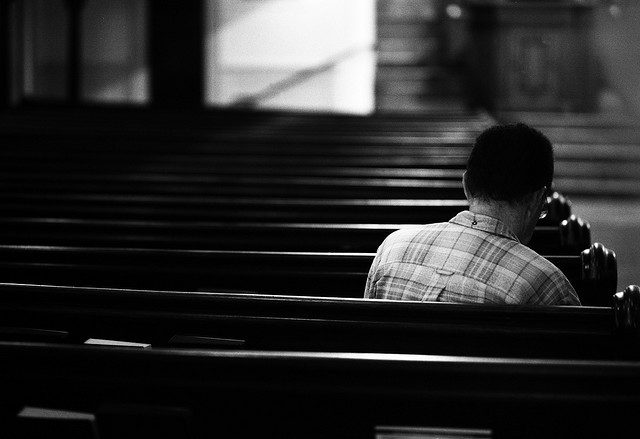 Why God is a stranger in most churches

He spoke as if he had the monopoly of biblical knowledge, wisdom and understanding. For two hours we listened to him blather on and on about the “word of God.” He was an entertaining preacher. He cracked jokes intermittently, and tried his best to be engaging and relevant.

We were glued to him. So glued, that we would occasionally cheer him on with shouts of amen and hallelujah juxtaposed with raucous laughter.

However, in the midst of his “theatrical performance” and hullabaloo, I felt uneasy and concerned. I was bothered that for more than two hours he was ‘preaching the word of God’ he never at no point quoted the Bible or made reference to the Scriptures. It was his “show”. Him the starring guest, man of the moment.

Everything he said was about him. He spoke a lot about his “blessing” more than he spoke about God, the sole reason why we were there. The whole two hours was strategically scattered with highlights of his life, his wife, his children, his wealth and it went on and on about him and more of him.

He struggled unsuccessfully to fit “God’s word” in his preaching. On the other hand, we struggled unsuccessfully to comprehend whether we were there to be lectured about his “blessed lifestyle” or hear the word of God. His flashy suit, expensive watch, gold plated rings that donned all his fingers, exaggerated larger than life ego and personality did little to provide the environment of God’s presence. God, indeed was a stranger in the church.

A quick look around the church revealed a disturbing truth. Walls were donned with larger-than-life high-resolution photos of him next to his smiley wife. The captions boldly written in Times Roman font and 10,687-font size praised his “calling and gifting” and not the author of the calling or gifting. This was his courtyard, him at the center court. This was his playground, him the MVP – most valuable player. This was his Cineplex, him the starring guest.

His ever committed and ever faithful congregation showered him with adoring shouts of Paps and Mum in reference to him and his wife. At times it was hard to decipher which father (him or God) they were making reference to. Testimonies about how he has changed lives, restored marriages, blessed thousands, healed many, delivered a handful and the list goes on filled the church. He subtly and humbly, albeit prideful received all the praises, glory and honor. It was his show, and no one, including God could share in that.

He spoke eloquently, was articulate and surprising very bold. On closer scrutiny, his preaching was laced with an essence of pride coated with arrogance and self-centeredness. He freely boosted about his ‘anointing’ and special relationship with heaven. It clearly felt like he was a mini-god living among mortal men who was doing nothing less than a favor to redeem poor souls.

Ladies and gentlemen, welcome to the modern church. A place where a good proportion of ignorant Christians find momentary solace, encouragement and comfort, of course for a price. Mostly, the price is subtly packaged as ‘planting the seed’ or ‘activating your miracle’.

Its a place where the minds of most have been conditioned and brainwashed to an extend that they will easily take the preacher’s word over God’s word. Questioning anything the man of God says or does is almost regarded as an abomination. At best, one will be labeled as an agent of the devil being used to ‘fight the man of God’.

I mean, who dares question a chap claiming to have direct heaven’s speed dials, and can do any miracle at a snap of a finger? A man, who though many will never admit, but almost comes out as having the powers and ability to ‘manipulate’ God to do anything and everything he so wishes.

This is the modern church where many have been hooked on like heroine. Their lives pretty much revolves around the church and the preacher’s word is final. Some have even been known to sell there little earthly possessions to ‘bless’ the man of God buy a fancy car. Never mind that most struggle to make ends meet.

Allow me to put a disclaimer here: Don’t get me wrong. I am not against the modern church or men of God. Granted, I am identified as a child of God, who is fully committed to my church and the gospel of Jesus Christ.

The aim of my writing is to sound a warning bell to anyone who may be following preacher’s ignorantly without taking time to interrogate what the Bible says. I would rather be wrong with a man of God and right with God, than right with the man of God and wrong with God. It’s interesting, however, what the Bible says with regard to the times we live in. A good student of the Bible clearly acknowledges the fact that we live in the last days, well articulated in the Bible.

For instance, 2 Timothy 4:3-4 says that: “For a time is coming when people will no longer listen to sound and wholesome teaching. They will follow their own desires and will look for teachers who will tell them whatever their itching ears want to hear. They will reject the truth and chase after myths.”

No wonder the churches that solely preach the so-called prosperity message are always packed, and the moment the preacher starts talking about holiness, purity and living righteously, somehow the attendance dramatically goes down.

Its my hope and prayer that we will remain vigilant and true to God’s word so as not to be easily deceived, and as 1 Timothy 4:1 says “turn away from the true faith” and “follow deceptive spirits and teachings that come from demons.”

So, the big question I guess is: then how do I know who is a false preacher or church. Well, this is as easy as it comes. Check out 1 John 4:1-3, it says:

“Dear friends, do not believe everyone who claims to speak by the Spirit. You must test them to see if the spirit they have comes from God. For there are many false prophets in the world. This is how we know if they have the Spirit of God: If a person claiming to be a prophet acknowledges that Jesus Christ came in a real body, that person has the Spirit of God. But if someone claims to be a prophet and does not acknowledge the truth about Jesus, that person is not from God. Such a person has the spirit of the Antichrist, which you heard is coming into the world and indeed is already here.”

In other words, the acknowledgement of Jesus’ death and resurrection as the Son of God is the first parameter. This also means that Jesus Christ should be at the center of everything we do. Our lifestyle, behavior, conversation and priorities – it should all be about Jesus. In church, Jesus should always be lifted above anyone or anything else.

Your pastor shouldn’t compete for the spotlight with Jesus. During a church service, congregations should feel more encouraged and motivated to seek Jesus. To know more about Him and experience His power. To feel challenged to exalt God above man, and live for Him in truth and righteousness. A preacher should only be a vessel used by God. Simply a carrier of God’s word, and nothing more.

Everyone in essence has been given the responsibility to study God’s word by himself or herself, so that they can “rightly divide the word of truth” (2 Timothy 2:15). Most of us are easily deceived because of our ignorance of God’s word. We are what James 1:6 calls “wavering” and “unsettled as a wave of the sea that is blown and tossed by the wind.”

Its therefore my sincere prayer that as we live in this last days, no believer of Jesus Christ will “turn away from the true faith” and “follow deceptive spirits and teachings that come from demons.”

Note: Unless otherwise indicated all Scripture quotations are from the New Living Translation (NLT). For more about this, read my article entitled: This is why I don’t go to church and The Gospel of Flossing.